Aiming for an Urban Cycling Mecca in Asheville, NC
http://www.urbanvelo.org/issue19/p46-47.html

The Group ‘Asheville on Bikes’ had their annual Bright Light Biker, a family friendly winter pedal through town. This year’s event focused on safe biking after a local man, Alan Simons, was shot at while on his bike. The Simons family were the featured guests during the ride.

An interview with Mike Sule, Executive Director of Asheville on Bikes. – 5 min

Now in Asheville! Click on the link to read more: http://www.mountainx.com/outdoors/2009/the_bike_lockers_have_landed

A mere 0.4 percent of Americans get to work by bike, according to the U.S. Census Bureau. The rate may be greater in Asheville, where there’s strong interest in sustainable urban development and a wealth of recreational-cycling opportunities. But try bicycling to the office, to school, to the movies, the grocery store or other in-town destinations, and it’s clear that cyclists here are still on the fringes of cutting-edge urban transportation. Compared with cycling-friendly towns like Boulder, Colo.; Portland, Wash.; or Davis, Calif., Asheville has few metro riding lanes or bike paths, forcing two-wheelers to compete for precious space on hectic bridges and dodgy boulevards.

Asheville on Bikes founder Mike Sule wants to change all that. And though cycling facilities and infrastructure are woefully needed, he believes the most effective way to foster Asheville’s urban two-wheel culture isn’t just adding more white paint and asphalt. Progress, Sule contends, also depends on putting more people in the saddle. 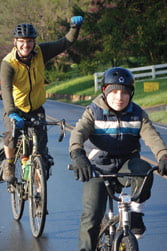 Two wheels and counting: Asheville on Bikes founder Mike Sule believes so strongly in cycling that he doesn’t own a car.

While on a bike tour in Oregon in 2006, the 34-year-old sixth-grade teacher was so impressed by what he saw in Portland that he challenged himself to try to cultivate a similar cycling culture in Asheville. His first endeavor, the following year, was gathering 25 riders for Asheville’s annual holiday parade. To his surprise, the cyclists—dressed as holiday characters that included a Thanksgiving turkey and the tooth fairy—won the “Spirit of the Parade” and “Best Overall” awards and pedaled away with $750 in cash prizes.

That booty became the seed money that launched Asheville on Bikes, a nonprofit cycling advocate.

The group’s initial venture was backing a proposal to place rental lockers downtown as part of a network of bike lanes and facilities. The city has since adopted the idea, and the first lockers are due to hit the street later this summer. A larger version of the lockers found in bus depots, they’re ideal for commuters who prefer to return to a dry—and intact—set of wheels after work, shopping or other urban journeys.

Besides organizing community rides and events such as the Bike Love Party, Bright Light Biker and Pumpkin Pedaler, Asheville on Bikes operates a free bike corral: a sort of mobile parking lot that can accommodate about 20 bikes in the space taken up by a single car. With support from such groups as the Asheville Bicycle and Pedestrian Task Force and the Blue Ridge Bicycle Club, the corral has been part of assorted local festivals, encouraging people to arrive by bike.

Such incentives are crucial in moving toward a long-term cycling future, says Sule, who doesn’t own a car. A seamless biking network, he maintains, provides economic, environmental and public-health benefits. “Relying on a bike focuses spending in the city. It means living locally and transforms a city into a neighborhood,” says Sule. “We want to empower cyclists to see themselves as an economic force.”

But cyclists can also be a political force, and plans are in the works for a bike forum that will encourage City Council candidates to support needed improvements. “Mike is so passionate about cycling,” says Asheville Transportation Planner Barb Mee. “When he talks about the advantages of living car-free, it’s so exciting. People then realize that it’s an opportunity to invest in the city.”

Others in the biking community say Sule’s enthusiasm complements the efforts of cycling entrepreneurs and advocates such as Claudia Nix, whom Sule names as his mentor.

Despite the city’s 2008 Comprehensive Bicycle Plan (which projects an eventual 181-mile network of bike lanes) and some success in developing the needed infrastructure, Asheville still has a long way to go, says Sule. But he’s betting that getting more people on two wheels will ultimately make this city seriously biker-friendly. “I think our urban biking culture is as passionate as Portland’s: It’s just younger. We want to develop it,” says Sule. “Once people become active and excited about the possibilities, the system has no choice but to follow our lead.”

Asheville’s Comprehensive Bicycle Plan can be found at ftp://www.ashevillenc.gov/Web/TransportationEngineering/Transportation/Asheville_Plan_Final_Adopted_022608.pdf