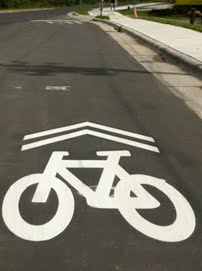 Summary: AoB requests your emailed comments to NCDOT in support of adding a bike lane to the proposed bridge to help both motorists and bicyclists know where they should position themselves when crossing the bridge.

Take Action: Email Mr. Undrea Major (ujmajor@ncdot.gov) to state your support for a bike lane on the proposed bridge at the interchange of I-26 and Brevard Road. (Yes, it’s just that easy to shape the future. Feel good?)

Backstory: The NCDOT recently hosted a public drop-in session at the NC Arboretum regarding the interchange at I-26 and Brevard Road to show their adapted plans for the interchange improvements.

Last year, the plan required removal of about 5 businesses (including Ethan Allen, Rug & Home, two hotels and Pet Smart).  The new plan doesn’t.  The new plan adds two more lanes to the present exit (when heading east) and moves the access road that is now across from the exit ramp to the light where the Ingles is located.  Ingles owns all the land behind their store and will probably build a new, larger store behind the present one to accommodate the new access road.

The ramp which comes up by Jim Barkley Toyota will be closed and come up through the back of Jim Barkley. The traffic signal will be moved away from the bridge to the other side of Barkley Toyota.  NCDOT shows a possibility of adding a bike lane on the bridge and the approach to the bridge.  This is not guaranteed, but we would like to have comments in support of adding this bike lane. A bike lane in this location will help both motorists and bicyclists know where they should safely operate when crossing the bridge.

Shoot our friends at NCDOT an email?