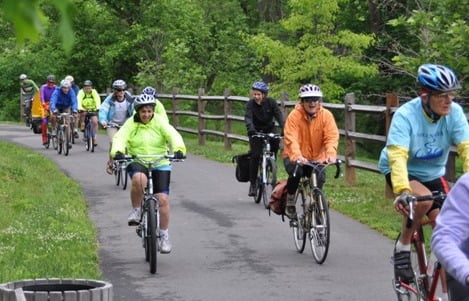 Asheville’s network of greenways and bike paths is currently expanding with new construction along Reed Creek. This second phase will extend the current path south towards downtown, paralleling Broadway, and nearly tripling the greenway’s current length!

The Asheville Greenway Commission is seeking input on their next moves in our city. They are hosting a drop in session to view their current plans, and looking for new comments moving forward. Your input will help guide the commission’s priorities and identify new potential corridors to pursue.

The meeting is at City Hall, on Thursday August 11 from 4:30-6:30. If you cannot attend you may also email or mail your written comments (details below).

Asheville, NC – The City of Asheville’s Greenway Commission will host a public meeting to receive citizen recommendations pertaining to the implementation of municipal greenway projects via the Capital Improvement Project budget. The current City of Asheville Greenways Master Plan was adopted several years ago.

The City of Asheville’s Greenway Commission welcomes recommendations pertaining to greenways already delineated in this Master Plan as well as potential new greenways. Comments regarding these greenways along with observations as to their implementation priority will be considered in the process of developing the Capital Improvement Project budget for 2013.

This meeting will occur in the Main Floor Conference Room in Asheville City Hall, located at 70 Court Plaza on Aug. 11, from 4:30-6:00 p.m. Maps of existing plans and possible additions to that plan will be available for review at this time.

The Greenway Commissioners and staff will outline and facilitate the process for prioritization of funding and the future direction of Greenway projects.

Public comments will also be accepted by email or mail addressed via the addresses noted for Al Kopf until October 1, 2011.