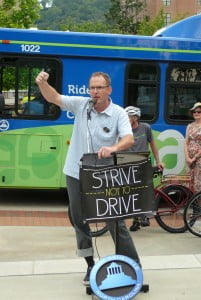 Asheville on Bikes is helping to make a difference in Asheville’s livability. Here our efforts, as well as the efforts of like-minded citizens and organizations, are featured in the Mountain Express. Your support powers the effort. Re-upped your membership yet?

Asheville on Bikes is trying to mount pressure on the city to make sure the transportation plan prioritizes bike lanes and greenways.

Jake Frankel does an excellent job articulating the challenges for improving safe active transportation. We need champions from government, business, and neighbors to coordinate and sustain the push. We’re all in this together. Let’s roll forward. http://mountainx.com/news/one-step-at-a-time/

Posted on March 20, 2015 by Jake Frankel
In 2010, hundreds of people marched down Tunnel Road advocating for the construction of a sidewalk between the Veterans Restoration Quarters and the VA Medical Center. That sidewalk has since come to fruition, but a report shows that Asheville is falling short of its goals.

In 2010, hundreds of people marched down Tunnel Road advocating for the construction of a sidewalk between the Veterans Restoration Quarters and the VA Medical Center. That sidewalk has since come to fruition, but a report shows that Asheville is falling short of its goals.

Amid rising interest in transportation alternatives, local activists have been stepping up efforts to make Asheville safer for walking and biking. But while some strides have been made that are worth celebrating, the path to greater advances seems to be lined with historic neglect and budgetary hurdles.

The city still has a long walk ahead to fulfill its 2004 goal of building 108 miles of sidewalks. In the last decade, Asheville has constructed only about 18 miles worth, according to a city report released last year.

Despite the slow rate of growth, the report does highlight some key improvements. For example, a mile-long stretch of worn grass and rocky paths along Tunnel Road — previously known as “the goat trail,” where veterans walk each day between the Veterans Restoration Quarters and the Veterans Affairs Medical Center — has been paved. But overall, says Asheville City Council member and longtime sidewalks advocate Chris Pelly, the average construction rate of 2 miles per year hasn’t been sufficient.

In fact, in a letter he penned to fellow Council members, Pelly noted that for the next five years, the city has about $550,000 slated for new sidewalks — enough to build only about one mile per year. “Despite clear and demonstrated need, the pace of progress seems to be slowing,” Pelly wrote. “We are effectively relegating many growing neighborhoods to decadeslong waits before residents can walk safely on their own streets.”

Each spring, Asheville on Bikes Executive Director Mike Sule and other advocates help organize a Strive Not to Drive campaign to encourage multimodal transit.

A recent survey commissioned by the North Carolina chapter of the American Planning Association found that living in walkable communities is a top priority for the millennial generation, a young demographic highly sought by cities for their growing economic clout. It’s no surprise, then, that the local business community has been increasingly supportive of multimodal advocacy organizations such as Asheville on Bikes.

“I think that for our business community, as they begin to value more and more walkability and bikeability — [for them] to help with some of these challenges is going to be critical,” says Mike Sule, AoB’s executive director.

Over the last two years, the city’s Neighborhood Advisory Committee hosted meetings in each sector of Asheville, which encompasses 50 neighborhoods. When attendees were asked to rate their concerns, a lack of sidewalks topped the list, according to Pelly, who serves on the committee. Pedestrian and bicycle counts tallied by the city indicate that the amount of walkers and bikers has dramatically increased since 2009 in a variety of areas, including those around Charlotte Street, Kimberly and Clingman avenues.

In the wake of a high-profile pedestrian fatality on Merrimon Avenue earlier this year, City Council held a retreat where it declared that new sidewalks should be a higher priority. But specific funding wasn’t determined. Pelly has proposed that the city commit $500,000 a year toward construction. 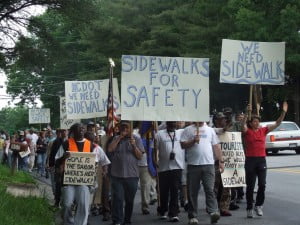 “I believe there is broad and significant pent-up demand for sidewalks and pedestrian improvements,” Pelly says in his letter. “If not now, then when? … Two miles a year is inadequate to the demands of our growing city.”

Meanwhile, the city is working on drafting a Multimodal Transportation Plan that is geared to “look at the system in a comprehensive way and will measure mobility deficiencies citywide and will develop and establish a priority system.”

Scheduled to be completed by the end of 2015, the process will involve several public meetings to solicit feedback. The overarching goal is “to create an effective and progressive plan that encourages health-oriented and sustainable transportation, reduces barriers to access transportation and connects residents and visitors with the places they want and need to go with improved safety, efficiency and accessibility,” according to the city transportation department’s website.

Sule and his group are trying to mount pressure on the city to make sure the transportation plan prioritizes bike lanes and greenways. In the past five years, he says, Asheville “has made considerable leaps and bounds taking on multimodal issues.” Those efforts included designating several miles of bike lanes and painting streets with bike-friendly “sharrow” markers, as well as opening new sections of greenway.

The improvements helped earn Asheville a bronze rating by the League of American Bicyclists, which evaluates cities across the country for their bikeability. And Sule hopes that rating will go up to silver in coming years.

Each spring Asheville on Bikes organizes a St. Patrick’s Day community ride to helping bring the riding community together and show support for infrastructure improvements.

Each spring Asheville on Bikes organizes a St. Patrick’s Day community ride to helping bring the riding community together and show support for infrastructure improvements.

A major improvement will be the expansive makeover of the River Arts District, which will include a wide array of interconnected sidewalks, bike lanes, parks and greenways. The city is partnering with a range of private parties and government agencies on those projects, funded in part by a $14.6 million grant from the U.S. Department of Transportation.

More comprehensive partnerships like that will be instrumental in making further progress, says Sule, who notes that many of the area’s roads are actually overseen by the N.C. Department of Transportation rather than the city.

The state agency adopted a “Complete Streets” policy in 2009, which directs it to “consider and incorporate” modes of transportation other than single-passenger vehicles when designing new projects or making improvements. That’s an improvement for a department Sule sees as having a “history of marginalizing bicycling and pedestrian infrastructure.”

However, the stated policy is still a long way from making the NCDOT “an exemplary model” when it comes to implementation, Sule adds. And his assessment is shared by Paul Black, director of the French Broad River Metropolitan Planning Organization, which helps direct major transit decisions across the region. “NCDOT is … not in the sidewalk business, so there is no easy way to provide sidewalks outside of city limits, even where the land use really needs them.”

In an attempt to increase bike safety on a dangerous incline, the state DOT did approve a climbing lane on Haywood Road, but didn’t contribute any of the roughly $100,000 in funding the construction required. Instead, the money for the lane, which gives slower-moving cyclists a designated area to climb the hill seperate from other traffic, came from the city and New Belgium Brewing, which is building a major new facility nearby at the edge of the River Arts District.

Sule has a long list of other DOT streets he’d like to see improved with bike lanes and sidewalks. The stretch of Riverside Drive from Amboy to Tunnel Road, and Broadway near downtown, top the list, as well as the rapidly developing South Slope area of downtown. Meanwhile, residents of the Hazel Mill, Merrimon, Five Points, Charlotte Street and New Haw Creek neighborhoods have been particularly vocal recently in their push for new pedestrian infrastructure.

In 2012, Buncombe County passed a Greenways and Trails Master Plan to eventually build about 83 miles of pathways around the area. Many would link existing parks, greenways, residential areas and schools; several follow waterways such as the Swannanoa and French Broad rivers. But a 2010 feasibility study for one of the proposed corridors suggests that the price could be high. Building an 18-mile greenway along the Swannanoa River/U.S. 70 corridor from the John B. Lewis Soccer Complex on Azalea Road in Asheville to Ridgecrest, east of Black Mountain, would cost an estimated $10.3 million. It’s hard to say where that kind of money might come from. Since passing the plan, the county has yet to build a single mile of paths.

The ongoing lack of county action is a sore subject for Sule and others. “I think there’s tepid political support for that at the county level,” he says. “There is absolutely more that I’d like to see done.”

So it seems that for major multimodal progress to keep pace with demand, activists will have to put pressure on politicians to start doing a better job of putting their money where their mouths are. “The biggest challenge for anything in the transportation realm is lack of resources,” notes Black.

Jake Frankel is an award-winning journalist who enjoys covering a wide range of topics, from politics and government to business, education and entertainment.