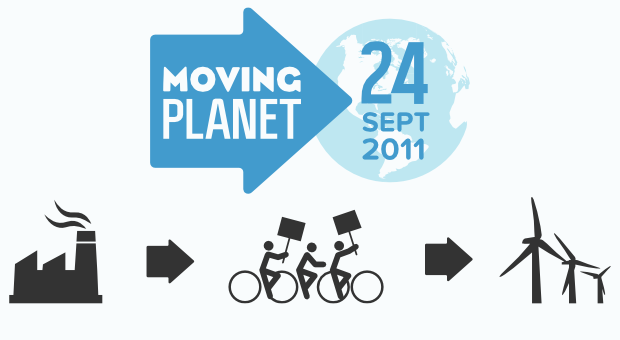 Moving Planet is a day of action focusing on the climate crisis, taking place in cities around the world on September 24th. It’s billed as a worldwide rally to demand solutions, to make our voices heard to move beyond fossil fuels.

Spearheaded internationally by the folks at 350.org, and locally by the WNC Alliance and UNCA, there will be a series of informative and fun events, free for all to attend. Asheville on Bikes wants you to show up, on your bike of course. We’re helping organize group rides from the different locations (Downtown to West Asheville, and then UNCA), and we’re setting up bike corrals to look after your ride while you check it all out.

We’ll start at a Transportation Planning Basics Workshop downtown, after a short rally we’ll head to West Asheville to check out the Burton Street Agricultural Fair, and then on to UNCA for a daylong rally of bands, speakers, and demonstrations. It all starts at noon from the First Presbyterian Church downtown. Get all the details here and for more info, check out the video below and 350.org founder Bill McKibben’s passionate invite to this movement:

The first few months of this year have been among the most exciting on record–people in half a dozen countries have stood bravely up for their rights. Many of them have won, overthrowing dictatorships that date back decades.

Our 350.org colleagues in those countries have–predictably–been a big part of the freedom movement, and they’ve been keeping us up to date on how they’re using everything from Twitter to graffiti art to spread the word. Most of all they keep saying how wonderful it finally feels to be in motion: to be marching, running, moving after years of being stuck in the same tired place.

That feeling of being stuck is how we’ve felt in the climate movement for years now. The scientists have told us why we must change–and every record flood and heat wave adds to their message. The engineers have told us how we can change, as they’ve quickly turned windmills and solar panels from promising experiments into tested technology. The only thing now preventing change is the hold of the financially powerful status quo–all those coal and oil barons, and their friends in high government places, keeping us stuck in the polluting mud of inaction.

This year is going to be about movement in every sense of the word. Not just the big shoulder-to-shoulder campaign we’ve built together across the world these last two years, but also actual, powerful, fun dramatic movement in the streets — putting into action our demand for a future free from fossil fuels and dangerous climate change.

Circle September 24 on your calendar–that’s the day for what we’re calling Moving Planet: a day to move beyond fossil fuels.

On 24 September we’ll be figuring out the most meaningful ways to make the climate message move, literally. We’ll show that we can use our hands, our feet, and our hearts to spur real change. In many places, people will ride bicycles, one of the few tools used by both affluent and poor people around the world. Other places people will be marching, dancing, running, or kayaking, or skateboarding. Imagine the spectacle: thousands of people encircling national capitals, state houses, city halls.

But we won’t just be cycling or marching–we’ll also be delivering a strong set of demands that can have real political impact. They’ll differ from one country to the next, of course, because the steps we need to take depend on how much fossil fuel we already use.

To make this political impact we need to start building momentum now. In the US, 10,000 young leaders got the ball rolling at the Power Shift 2011 summit and rally in Washington, DC last weekend. We’ll build this momentum together over the next five months, with hard-hitting online campaigns, focused grassroots organizing at the local level, and climate leadership workshops around the world.

Our friends in Tunisia, Egypt, and throughout the Middle East have proven that change can come quickly. The greatest achievements have been without violence, but not without sacrifice. They’ve done it with bravery, and also good humor; with the internet and also with face-to-face organizing. They’ve got things unstuck in countries that seemed rusted shut. They’re our inspiration for the months ahead.

P.S. While we’re gearing up for Moving Planet, we’re also hard at work on other focused campaigns around the world, like the U.S. Chamber Doesn’t Speak for Me campaign I described in in my speech Powershift 2011. But on 24 September, we will get to combine our local actions into something very big and very beautiful–and put the powers that be on notice that the dirty status quo won’t hold much longer.