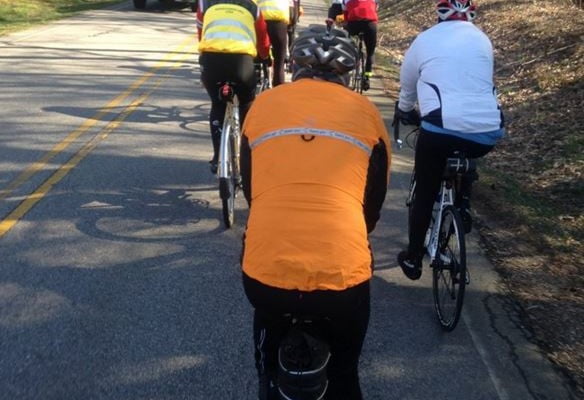 FROM: Mike Sule on behalf of Asheville On Bikes

I learned yesterday that the RADTIP project must be modified because of budget concerns and that you are considering the postponement of plans to build several critical pieces of infrastructure, including the protected bike lane along Lyman Street and the modifications to the railroad crossing near Smoky Park Supper Club. While disappointed, we recognize that some multi-modal facilities have to be cut. We hope the city will reaffirm its commitment to active transportation infrastructure in the future. AoB affirms that  public safety is paramount to any RADTIP adjustments.

As you adjust priorities, public safety must be your primary criterion. The two pieces of infrastructure I just mentioned are vital to the future of the city and to public safety. If the Lyman Street bike lane and western sidewalk are removed, Asheville On Bikes (AOB) urges you to replace them with a multi-use path at least 16 feet in width, and lane markings to separate users. This design complies with FHWA standards, increases safety, and will support a high volume of bike and pedestrian traffic. Lyman St  needs the best possible bike and pedestrian infrastructure that we can afford because it lies at the very heart of our future grid of connected greenways and bike lanes. The city should build active transportation infrastructure to standards that anticipate future use. The Swamp Rabbit and American Tobacco trails see 500,000+ users annually. RADTIP can anticipate similarly heavy use. Make it safe for all users and do not neglect this part of the plan. Frankly, it should have been built first

Similarly, the railroad crossing near Smoky Park Supper Club is unsafe, it is a known hazard, and the city is failing to act to make it safe. It injures people every year. When you think about re-arranging funds, it is unconscionable to our membership that you would spend money anywhere in RADTIP without addressing these railroad tracks which are responsible for so many broken bones, concussions, and other injuries to your citizens. Addressing the public safety issue of this unsafe rail crossing cannot be delayed.  Please make sure that a public safety fix which allows for safe cycling over or around the railroad crossing is included in your re-prioritization. Asheville on Bikes is a willing partner and is eager to assist the city as you address these concerns.