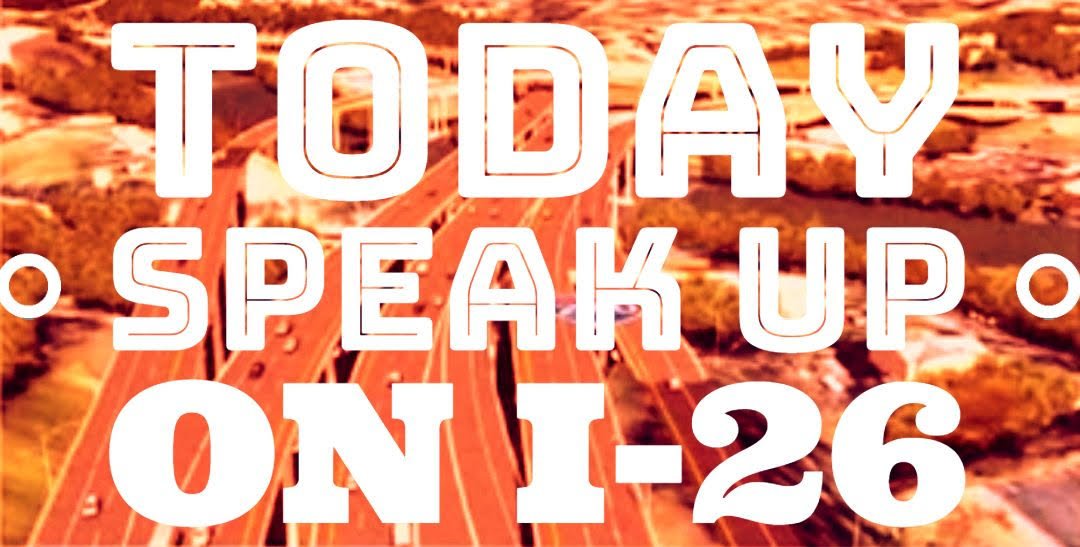 On Tuesday, Dec. 4 from 4:00 – 8:00 pm at the Renaissance Asheville Hotel (31 Woodfin St 28801), North Carolina Department of Transportation hosts public comment on the I-26 Connect project.

When the time comes to email your comments to NCDOT, please be sure to cc AoB at ashevilleonbikes@gmail.com.

Asheville on Bikes has reviewed NCDOT’s I-26 Connector plan and has compiled a list of recommendations to advance bicycle and pedestrian facilities. AoB recognizes that this project will have major negative impacts on our community but we acknowledge that the project is inevitable and, therefore, seek to maximize active transportation facilities and connectivity.

Asheville on Bikes is informed by National Association of City Transportation Officials’ (NACTO) “Designing for All Ages and Abilities” report, and critiques NCDOT’s I-26 Connector project through the lens of creating active transportation facilities that are: safe, comfortable, and equitable.

Asheville on Bikes encourages our members and supporters to review our list of recommendations and consider them as they participate in NCDOT’s upcoming public hearing.

Questions we think you should ask at the 12/4 public hearing:

To view high resolution maps, visit the NCDOT project site to download the pdf files. By viewing the pdf, you can zoom in and move around each section of the project. Our excerpts are based on those pdf files as they exist on 12/1/2018.

Specific Design Comments (all referenced by letter in the map excerpts):

The current caged walkway connecting the Hillcrest neighborhood across Patton Avenue is not suitable for future use, especially given the presence of the new greenway. It is narrow, caged, with steep steps, and not functional for bicycle use. A new structure should be included that features ramps and not steps, is not caged, and is wide enough for bicycle users to pass each other (at least 8’). It should provide a bikeable merge onto the greenway.

Arlington Street should be designed for vehicular traffic @ 25 mph and should include traditional bicycle lanes of 5’ on each side of the travel lanes. This will be a heavily-used bicycle connector for the Hillcrest neighborhood and for all of the Montford neighborhoods via Hill St. and Courtland St.

A neighborhood connector path (8’ wide, simple asphalt) should be provided, connecting the greenway to Club St. This will ensure that cyclists and pedestrians are not forced to travel all the way to Clingman Ave. to access the Chicken Hill neighborhoods and the River Arts District. Many bike/ped users of the greenway travelling across the Bowen Bridges from the west will have the River Arts District as their destination.

The portion of the West Asheville Greenway that runs from its merge with Smith Mill Creek Greenway to Clingman Avenue, given number of people living along each greenway and their desire to travel to and from downtown, or to enjoy the view overlooking the river, could well be the most heavily used section of greenway anywhere in the community and perhaps in the state of North Carolina. AASHTO standards provide guidance for greenway width specifications based on use levels, and accordingly this section of greenway should be designed at 16’ wide. All greenways and MUPs throughout the project should include standardized pavement markings to assure safety and minimize user conflicts.

This will be a very busy intersection for vehicle travel. Because the intersection will not be signalized and will be very active, automobile traffic will typically be moving rapidly between Patton Ave. and Hazel Mill Rd. The greenway will be very busy here, and potential for safety problems will be very high, especially in the evenings and other times of low visibility. Traffic calming and other measures should be deployed to ensure safe crossing of Hazel Mill Rd. for greenway users. Additionally, Hazel Mill Rd. as it leaves Patton will be a very popular route for bicycles and pedestrians to access the River Arts District on the west side of the river. The section of Hazel Mill to be rebuilt here by DOT should incorporate sidewalk and bicycle design features. 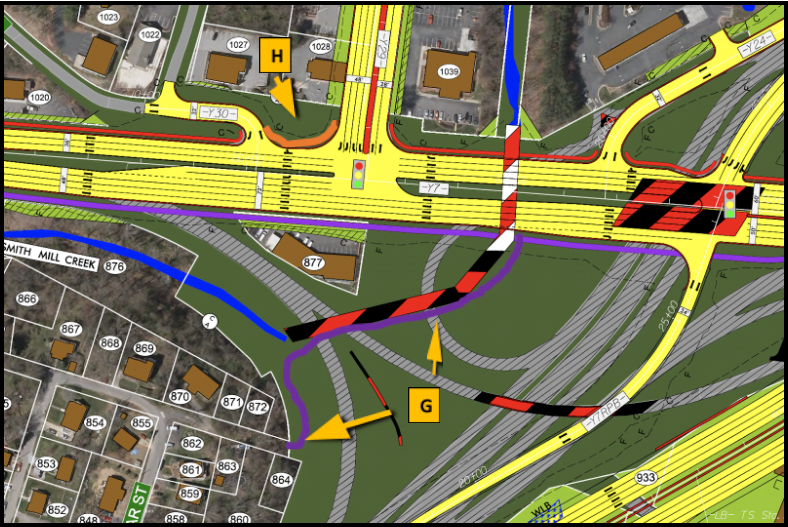 A neighborhood connector MUP (8’ wide, simple asphalt) should be provided to connect the Burton Street neighborhood to the Smith Mill Creek Greenway. Otherwise, cyclists and pedestrians in those neighborhoods could be forced to travel much greater distances uphill and westward for access.

Residential areas branching from the Hazel Mill Rd. corridor are very populous and growing. Hazel Mill Rd. will be a busy and popular route for those seeking access to Smith Mill Creek Greenway and points beyond. The Hazel Mill / Patton intersection here should be connected to the Regent Park/Patton intersection by a 10’ wide properly marked MUP to provide adequate safe connection. A simple 6’ sidewalk here is not suitable for cyclists and pedestrians to mix, especially at the edge of Patton Ave. 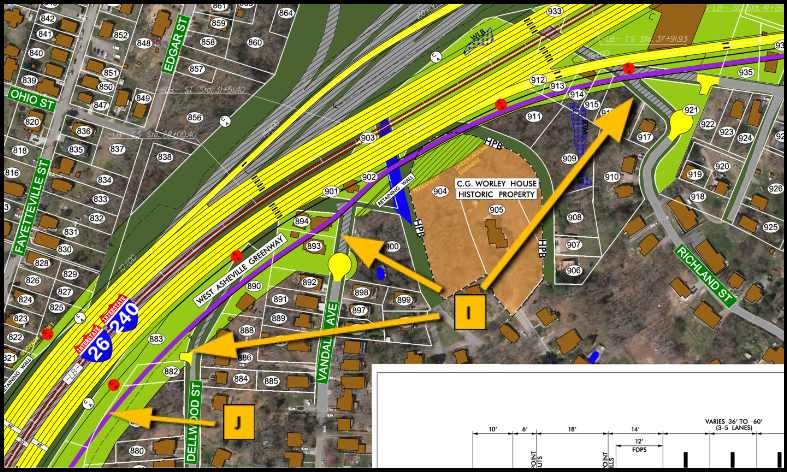 Neighborhood MUP connectors (8’ wide, simple asphalt) should be provided to allow the extensive neighborhoods of East West Asheville to connect to the West Asheville greenway via Dellwood, Vandalia, and Richland Streets. This will significantly reduce the number of cyclists that would otherwise mix in at the Haywood Rd. and Hazel Mill Rd. access sites.

The West Asheville Greenway between Haywood Rd. and the merge with the Smith Mill Creek Greenway is a primary connection between downtown and the River Arts District for a large population and will be very busy. Accordingly, per AASHTO guidance, it should be sufficiently wide (14’) and properly marked.

The Haywood Rd. bridge over I-26 and the intersection with the West Asheville Greenway will be a very busy area for cyclists given the populous neighborhoods and popular commercial areas that radiate from here and public school adjacent to the intersection. As currently depicted, the bridge and the approaches do not incorporate bicycle features or safe pedestrian facilities. The current design allows for increased automobile speeds compared to the immediately adjoining sections of Haywood Rd. Traffic calming features, narrower travel lanes, and traditional 5’ bike lanes should be incorporated on Haywood, as should NACTO-standard intersection treatments.

A neighborhood connector MUP (8’ wide, simple asphalt) should be provided to connect Argyle Lane to the West Asheville Greenway. 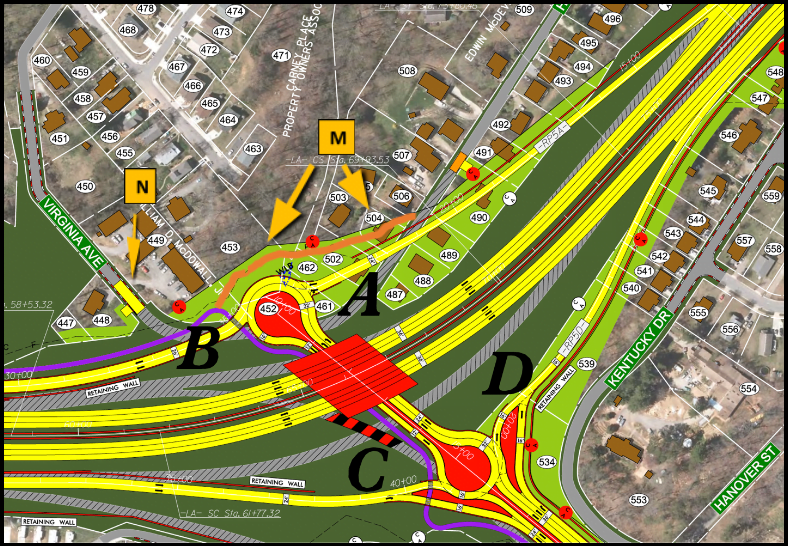 In the proposed design, Hubbard Avenue in West Asheville would be significantly isolated and unconnected to Virginia Ave. and other possible connections to the Amboy Rd. MUP due largely to topography. An additional section of neighborhood connector MUP (8’ wide, simple asphalt) should be included. This will allow for neighborhoods beyond Hubbard to also connect efficiently to Hominy Creek, Carrier Park, and other areas.

There should be a neighborhood connector MUP (8’ wide, simple asphalt) from Virginia Ave. to the Amboy Rd. MUP. 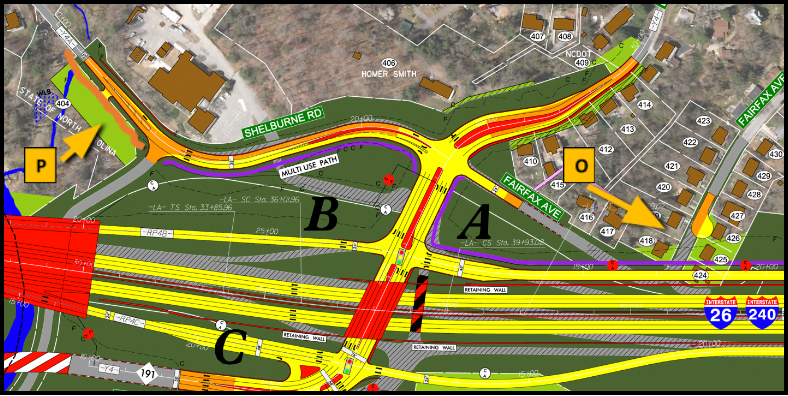 There should be a neighborhood connector MUP (8’ wide, simple asphalt) connecting Fairfax Ave. to the Amboy Rd. MUP

A section of standard MUP (10’ wide, marked), should be provided to extend the Amboy Rd. MUP to the trailhead of the City’s current Hominy Creek Greenway. Without this connection, cyclists and pedestrians would be forced out into this busy part of Shelburne Rd. due to the steep bank that exists there now between the roadways and the DOT-owned paved parking area.

The Riverside Drive MUP will provide a critical commuter route to connect with Broadway, UNC Asheville, and Woodfin areas where additional greenways and bike lanes are planned. A parallel greenway is planned by the City of Asheville to be located largely at the edge of the river. Because the greenway will accommodate a portion of the heavy use demand in the corridor, a 10’-wide MUP facility should suffice. Note that this MUP will be popular for faster-traveling bicycle commuters while the river-edge greenway will be popular for other slower-paced uses. Given the anticipated heavy-use in the corridor, both facilities are critically needed.