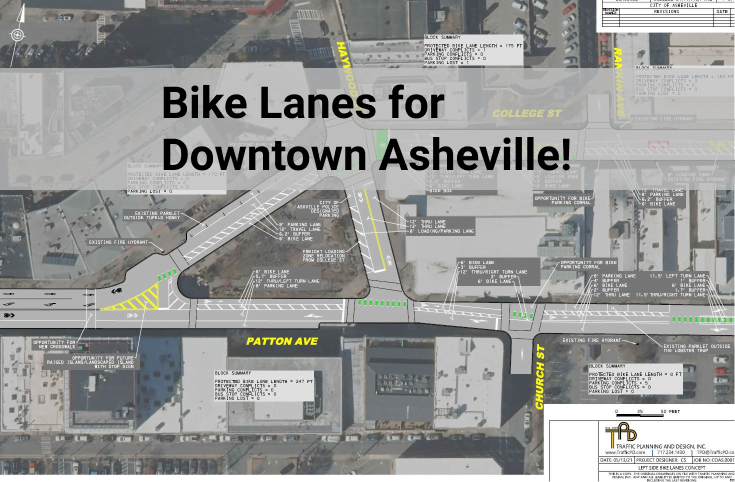 Here’s a map with the new proposed bike lanes shown in green and proposed loading zones are shown in yellow. Note that these green lines form core connections within a larger network that is steadily growing, as it should:

This plan takes the lightly used space within the current right of way and dedicates some of it for use as a “Bike Plus” lane, a space suitable for use by low-speed vehicles like bicycles, ebikes, and electric scooters.

It is also worth noting that College Street is already a one-lane street just east of this location and again reverts to one lane alongside Pritchard park. This plan uses some of the wasted space in the middle section to better accommodate people moving in downtown who are not in cars. The bike + lanes also create important core connections for a larger future network.

We have another photo, this one of Patton, when a section of Patton Avenue in the area of this project was closed for a week to allow a crane to access the roof of the Collider building. The current plan builds upon what we learned during the crane scenario to create a dedicated Bike + lane along lane along this section of road, in addition to the car travel lane.

It will be interesting to see how the increased bicycle and pedestrian use along this corridor affects land use. It may be that more people moving at slow speed creates the economic incentive to redevelop the parking lots at 26 Patton, located just south of the crane in this photo so that those properties again become mixed-use commercial buildings. In several studies of the economic benefits of walkable downtown areas, bicycle and pedestrian users typically spend more per day than car users. In this study, now twice confirmed, cyclists and pedestrians spent 40% more per day in stores, compared to customers traveling by car.

These initial plans have been shown to key City of Asheville departments and groups. More public feedback is upcoming and we’re writing about the plan to help spread the word.

Sanitation – No major issues. Prefer limited use of tall vertical delineators to allow for easier access for trash pickup.

The design for this project creates a bike lane on the left-hand side of these streets. That design was selected because it minimizes changes to parking and other disruptions while adding a safer travel lane for bicycles and other small personal vehicles. They were also prepared with downtown’s special operational needs in mind, including minimal disruption to loading zones.

No negative impacts to traffic throughput are expected

Quite the opposite of restricting corridor throughput, changes to streets like these will move more people per hour than the designs in place today. The key is to measure people, not just cars. Here’s how that works out:

Asheville on Bikes and Connect Buncombe paid for these initial designs, which were completed by Traffic Planning and Design in cooperation with the City of Asheville.

$100,000 in City budget is already programmed in City of Asheville City Improvement Plan (CIP) for implementation, including costs for:

A Bike + lane is a dedicated lane of travel for bicycles as well as other small personal transportation vehicles, so long as those vehicles are small and low speed.

This term is intended to signify that a bicycle lane is not just for bikes. It is acceptable, maybe even desirable, to think of these new types of travel lanes as “Bike Plus” lanes. It may be time for the term “Bike Lane” to evolve and, if so, the phrase Bike + lane does seem to encompass the types of use they are being built to accommodate.

The proposed bike lanes and loading zones are in keeping with several of our City’s planning documents.

These new bike lanes and loading zones downtown are welcome additions and are designed to fit like a puzzle piece into our future network of multi-modal streets. The proposed bike lanes will connect easily with the bike lanes on Hilliard, the bicycle climbing lane on Haywood, the bike lanes running north / south on Lexington, the bike lanes on Coxe, and, using Central Avenue, connect to the Charlotte Street bike lane. Can you feel it starting to come together? We want to live in a City where people can move about using a variety of modes, door to door, using bike lanes, greenways, trails, transit, and sidewalks. And cars.

What are the next steps?

How can you help?