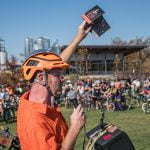 News, information, and resources for media

If you are a journalist, blogger, or reporter and would like to reach out to Asheville on Bikes for story or comment, we welcome you to contact us via our online form. Please include your name, contact information, and time frame for response.

Press inquiries should be directed to Mike Sule, Executive Director of Asheville on Bikes. In addition to using our web form, you may also email Mike directly.

About Asheville on Bikes

Asheville on Bikes is a 501(c)(3) nonprofit organization dedicated to cultivating the culture of urban and commuter cycling in Asheville and Buncombe County through advocacy & celebration. Founded in 2006, Asheville on Bikes began as a group of 25 cyclists who dressed up and rode in Asheville’s holiday parade, winning a $750 prize for their spirited presence. That prize became the nest egg for Asheville on Bikes’ initial advocacy efforts, including community rides, bike corrals, and many, many emails to city and county staff.

We believe that cycling has a direct impact on the health and happiness of our community. Our membership, board members, and dozens of business sponsors work with public officials at the city, county and state levels to advocate for better roads, sidewalks, greenways and infrastructure that allow bicyclists, pedestrians, and motorists to safely exist in harmony. In addition to our advocacy efforts, Asheville on Bikes celebrates the joy of riding a bike through family-friendly group rides, bicycle safety and education courses, and premier annual events.

We’ve made a real impact

Our efforts have resulted in numerous victories for cyclists and pedestrians, including:

Asheville on Bikes gets noticed! We’re proud and honored to be considered an authority on bicycle and pedestrian issues, and have been featured in various publications.

North Carolina Talks the “Vision Zero” Talk While Pushing to Make This Speedway Even Wider – Streetsblog USA
Jan 11, 2018
Read the Streetsblog coverage of NCDOT’s failure to follow through on Vision Zero and Complete Streets in their plan for widening and speeding up a section of Merrimon Ave.

A stretch of road where railroad tracks cross Riverside Drive is a danger to cyclists and needs to be fixed, according to a local nonprofit. Mike Sule, executive director of Asheville on Bikes, said his organization is collecting damage and crash information for the city through an online report. Continue reading…

Who knew that heartbreak could be so good for the local cycling scene? Back in 2005, bike advocacy helped Mike Sule distract himself from the heartache of a tough breakup. Since then, however, Asheville on Bikes, the organization he subsequently founded, has become a well-known advocate on both local and state-level transportation issues. Continue reading…

“I think our urban biking culture is as passionate as Portland’s; it’s just younger. We want to reign it in and develop it…Relying on a bike focuses spending in the city.We want to empower cyclists in Asheville to see themselves as an economic force.” – Mike Sule in Urban Velo. Continue reading…

Asheville on Bikes makes news! A few of our most recent press releases…

Here are some handy images you can use when writing about Asheville on Bikes. Please credit Asheville on Bikes as your source (and we always appreciate a link to our website)! Need a different image? Contact us and we’ll do our best to accommodate you.